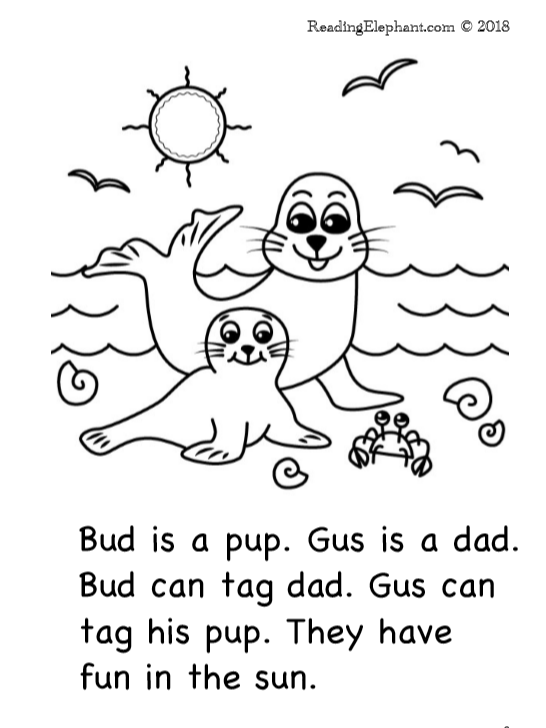 Phonics lessons for kindergarten should give kids a strong decoding foundation. Decoding skills allow kids to sound out words. When a child can read words sound-by-sound, he can read a broad range of English text.

Most English words are phonetic to some degree. Even words like “preamble” are phonetically regular because “pre” and “ble” have consistent pronunciations. Also, “bear,” often cited for its irregular spelling, still has phonetic components: the /b/ and /r/ are regular. In fact, only a small percentage of English words are irregular.

Thus, if you teach a child to decode, you give him the tools to read nearly any word. In phonics lessons for kindergarten, work on giving your student a strong decoding foundation so he becomes a confident reader.

For a printable pdf sample phonics lesson for kindergarten see:

Some phonics curricular include more activities, but the above are important for reading success.

For more details on each activity, see below.

For a printable pdf sample phonics lesson for kindergarten see:Lesson for Kindergarten PDF

Teach one phonics sound per letter

Kids need to rote memorize letter sounds. You can use mnemonics to help your student. For example, you can teach that m says “mmmm” as in monkey or c says “c” as in cat.

If your student is ready, introduce a new phonics sound. Maybe your student needs to learn short e. Write a short e sentence on the board like:

The hen set an egg in the nest.

Tell your student that “e” says /e/ as in hen, set, egg and nest. Turn your new sound “e” into a phonics flashcard.

qu as in quick

Sight words break the phonetic code in some way. Kids need to memorize how to spell sight words, because they can’t sound them out. Words like “their” and “could” are sight words.

Words like “play” and “happy” are often found on sight word lists. However, these words are totally phonetic. Kids should not memorize phonetic words: they should decode them.

Some more sample sight words include “would” “the” and “they.” These are words that have something irregular about them. For example, the “oul” in “would” is irregular, the “e” in “the” is irregular and the “ey” in “they” is irregular.

Since kindergartners need to learn to spell sight words, you should include sight word flashcards in your lessons. Cover them up with your hand. Have your student try to spell them from memory. Then reveal the word to help your student make any corrections.

Phonemic awareness is the ability to segment, blend and manipulate sounds. For example, a phonemically aware person can segment “grass” into 4 sounds: “g-rrr-aaa-ssss.” In addition, a phonemically aware person can identify that although “shrill” has 6 letters, it only has 4 sounds: “sh-rrr-iii-lll.” Children need to be taught PA. It is not an innate skill. We all develop phonemic awareness as we become literate.

The letter switch out activity can help kids see that changing one letter changes the entire meaning of the word. kids can read words like: mat, sat, sap, tap, tip, top. This word list helps kids understand the importance of sounding out words. With just one letter change, the whole word changes.

Phonics lessons for kindergarten should include spelling. Have your student spell about 5 phonetic words, 2 sight words and a sentence. Make sure your student doesn’t memorize how to spell the phonetic words. She should write sound-by-sound. Here’s a good sample spelling list for kindergarten: 1. Mat 2. Hen 3. Bag 4. Him 5. Cup. 5. They 6. The 7. They ran to the red mat. ReadingElephant.com offers 120+ step-by-step printable learn to read books.

Enter our shop at ReadingElephant.com for our 120+ printable decodable books.

Introduce a new phonics sound if your student is ready. For example, if your student needs to learn short e, write a short e sentence down like: The hen set an egg in the nest. Say “e” says “eeeee” as in heeeen hen.” Make an “e” phonics flashcard to review daily.

Create the following flashcards. Ask the student to sound them out and make a sound tweak. Then, cover the word and have your student spell the sight word out loud (no writing).

are, said, you, have, there, again, some

I say the word. You say the sounds slowly and in order: nip, wed, Rob, log, tub, hut, yet

Read the following 20 words sound-by-sound. Then, blend the sounds to say the word.

Spell the following words sound-by-sound. “The” “into” and “some” are sight words: spell the sight words from memory.

Beginner reading books should help kids learn to read in a gentle, step-by-step way. There are high[...]