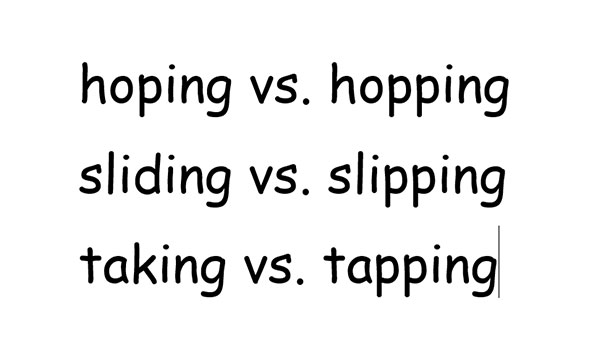 Typically kids learn to spell inflectional ending words in second grade. However, this can vary depending on the curriculum the school is using. Some kindergartners begin learning inflectional endings with short vowel sounds so they can read words like running, jumping, sitting… etc.

If the first vowel is short, double the consonants in the middle. Some examples include: jogging, running, sitting, digging, splitting, swimming… etc. If there are already two consonants, then there is no need to double as in jumping, tracking, standing…etc.

If the first vowel is long, do NOT double the consonants in the middle. Drop the e. Some examples include: hoping, piling, tiring…etc.

If there is a vowel digraph as in ee, ea, ai, oa… etc. then the student simply adds ing. Some examples include: sailing, dreaming, roaming… etc.

This list has a variety of words types. There are short vowel, silent e and long vowel sounds. This allows the student to practice the inflectional ending rules. Since she isn’t sure what word type will come next, she cannot guess. For example, she can’t always double the consonants and get the right spelling. She must stop and think about which rule really suits the word type. Thus, a list like this will give better long-term results.

ed says /t/ as in missed

ed says /d/ as in sailed

ed says /id/ as in rested

Teach your student the three /ed/ sounds explicitly. Write them on the board and say, “/ed/ says three sounds: /t/ as in missed, /d/ as in sailed and /id/ as in rested.” Write ed on a flashcard. Have your student say the three sounds. Practice the ed flashcard daily along with all the other phonics sounds your student has learned.

/est/ says /ist/ as in fastest

When do you get a child off decodable books?

Structured literacy is a new term (but not a new method) for systematic phonics instruction. This t[...]

Kindergartners should know consonant digraphs by the end of the year, including: sh, th, ch, _tch, [...]

What is structured literacy?

Kids usually learn r-controlled sounds in first or second grade. These sounds can cause some co[...]