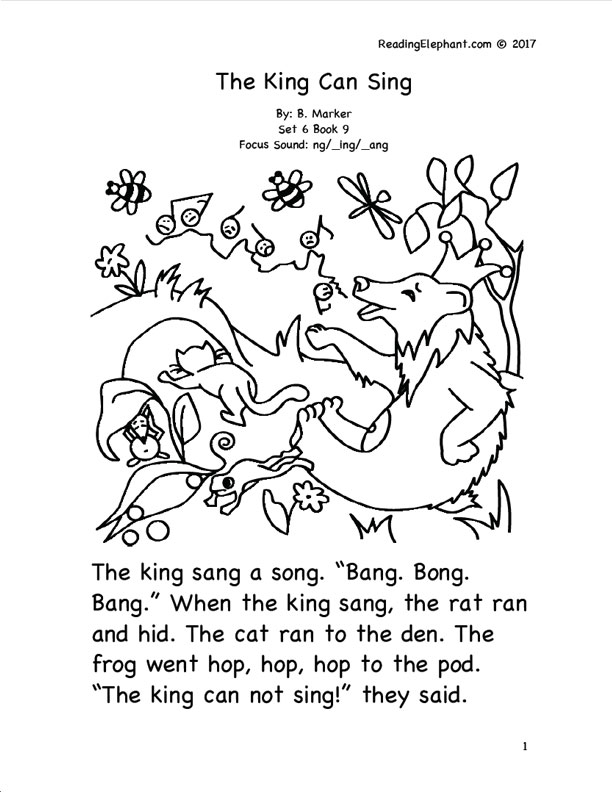 A beginning reader should read phonics stories in a certain way. Beginners need to learn that they’re reading a breakable code and that this code can be blended together to create words. Let’s say a beginning reader has to decode:

The pup sat on the mat.

The student should not read fluidly like an expert. Otherwise that would imply he is guessing or had just memorized the words. Instead, teach your beginner to read in 2 steps. Additionally, teach him to recognize sight words.

Step one: say the sounds in order

Continuous sounds are sounds the student can hold for a long time without adding any sound distortion. These are sounds like m, short a, short i, l, n, f…etc. For example, the student can say mmmmmm for a long time without adding any additional sound. Your beginning reader should elongate every continuous sound when reading early phonics stories. Eventually, he can drop this habit.

Stop sounds are sounds you cannot hold. If you try to hold a stop sound like /d/, you will inevitably add an additional sound /uh/ and say “duh.” This is incorrect. /d/ says “d-” not “duh.” Thus, teach your student to clip off the “uh” sound when he says stop sounds. This allows him to say “p-uuuu-p pup” and helps him avoid saying “puh-uuuu-puh papa.” Other stop sounds include b, c, g, j, k, t…etc.

In sum, step one means your student says the sounds in order, holds continuous sounds and clips stop sounds to say: “p-uuuu-p.”

It may seem intuitive that naturally you’d teach your student to blend sounds. After all, the blending part is the final step in reading and allows us to lucidly hear the word. However, when I observe educators, I see that most people skip either step one or step two.

Your beginning reader needs both steps. Thus, she should read pup as “p-uuuu-p pup” sat as “ssss-aaaa-t sat” and mat as “mmmm-aaaa-t mat.” It may seem like your beginning reader is saying the word 2x, but he’s really not: he’s identifying the sounds the first time, and blending them the second time. This will help him become an accurate reader, and this early method will result in more accurate reading later on as well.

Why do people tend to skip a step? Usually, we’re so excited that the student is reading at all, and we don’t want to correct him for something that seems, on it’s surface, nit-picky. If the student says the sounds, we want to cheer him on. We don’t really want to say, “Ok, now it’s time to blend the word.”

Beginning readers are also very excited that they can decipher parts of the code and they want to pummel through the text without blending. Thus, a beginning reader will often read the sentence, The pup sat on the mat, as: “The p-uuuu-p ssss-aaaa-t oooo-nnnn the mmmm-aaaa-t.” This is an incorrect reading and should be corrected immediately. The student needs to blend the words.

A beginning reader should read in 2 steps.

Beginning readers also need to know a handful of sight words to read books. For example, in our sentence (The pup sat on the mat.), the student needs to know the sight word “the.”

So what is the correct way for a beginner to read The pup sat on the mat? He should identify “the.” He should say the sounds in order first. Then, he should blend the sounds. Here’s what he should say:

As he gets better, you can have him go back to the beginning of the sentence and read “The pup sat on the mat” more fluently. However, never, ever tell your student to read fast. Only focus on accuracy. Teach him to read accurately and the reading speed will come across all those years of diligent reading sessions ahead. Eventually, your student can drop the first step and just read the words fluently.

In sum, beginning readers should read in 2 steps. Pay careful attention to what you’re doing in your reading sessions. Make sure you encourage your beginning reader to first say the sounds and then blend them. As inefficient as this may seem, it will promote accurate reading into the future.

Kindergartners should know consonant digraphs by the end of the year, including: sh, th, ch, _tch, [...]

What is structured literacy?

Kids usually learn r-controlled sounds in first or second grade. These sounds can cause some co[...]

How to Teach Sight Words

Sight words are common words that are not entirely phonetic. For example, "the" is a sight word. "T[...]

Are you working on teaching your student the /ing/ ending? Here's a fun /ing/ worksheet your studen[...]