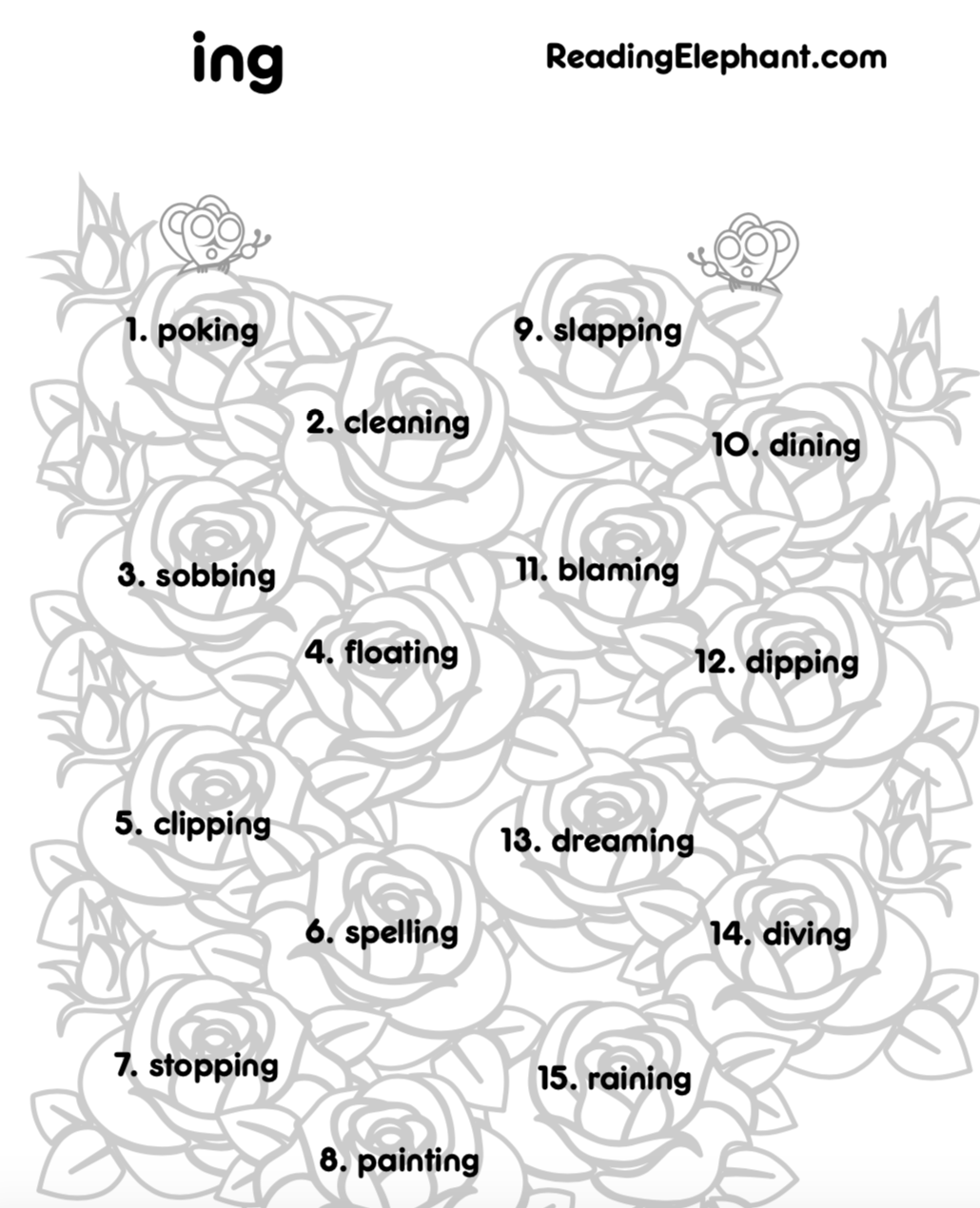 At first, kids learn to read single-syllable words. Once they’ve mastered these word types, they move on to learn the ing inflectional ending. Janice was a 3rd grader that could not read ing inflectional ending words like dining, tapping or sailing. As a result, she was stuck on low level books, and her reading skills did not progress. At school, the reading curriculum did not introduce ing words in an explicit way. Thus, her reading struggles continued.

What does the ing inflectional ending say?

Inflectional ending ing says /ing/ as in making, meeting, and setting. The sound /ing/ is straightforward. However, students often struggle with ing inflectional ending words, because determining the sound of the first vowel can be tricky.

Rule: If there are 2 consonants in the middle, the first vowel is short.

Teach your student the above rule. This means that when your student spells you must teach her to ADD a consonant to make short vowel inflectional ending ing words. For example, pet becomes petting, hop becomes hopping and wag becomes wagging. Notice that you must add a consonant.

Rule: If there’s 1 consonant in the middle, the first vowel is long.

Ex. hopping vs. hoping– You can use the same words as above, because they demonstrate the same concept. If you want to use a different example you can use hitting vs. hiding, dotting vs. doting, slipping vs. sliding, trimming vs. timing… etc. Each of these word sets demonstrates that the number of vowels in the middle determines the sound of the first vowel. Write contrasting words like these in front of your student. Show her the rule.

Teach your student to read and spell the vowel pattern when spelling ing inflectional ending words.

When do students learn the ing inflectional ending?

In kindergarten, kids usually learn ing words like: ring, sing, king…etc. These single-syllable words are not inflectional endings. The student learns this /ing/ sound (that is not an inflectional ending) in Kindergarten around the same time she learns other consonant digraph sounds like: sh, th, ch, _tch…etc.

Consonant blends- Consonant blends are 2 or more letter sounds in a row. Do not teach students to memorize blends. Teach them to decode blends sound-by-sound. Some samples include: fl as in flop, br as in brim and cl as in click. There are two exceptions. Teach kids to memorize tr as in truck and dr as in drop, as these two have a sound change.

ea as in seal

ai as in rain

oa as in boat

ow as in glow

oo as in look

ew as in new

ir as in bird

ur as in turn

ing as in tipping (first vowel is short)

ing as in timing (first vowel is long)

After kids learn the ing inflectional ending, they may be ready for more sophisticated books.

Kids learn to read with phonics books, but after a certain point, kids are ready for harder text. If your student has mastered inflectional endings, you might want to test out some harder books with her. Just make she reads with 92% accuracy or above.