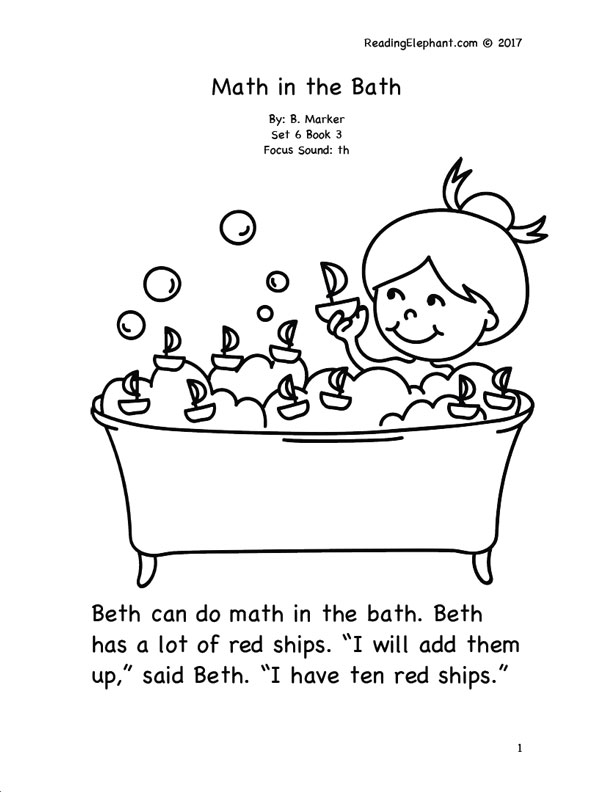 Ron was in kindergarten. He knew letter sounds, but he was still behind. His classmates were reading at a higher level. They were able to read words like ship, that, back, sing. Ron was desperate to learn to read. The school expected him to “just get it.” The school thought that if you provide a child with a language rich environment and surround him with books, he’ll pick up on reading. The school did not systematically and explicitly teach th words for kids, sh words for kids, or any other word type known as consonant digraphs. In this post, I’m going to target th words for kids, a word type that should be taught in Kindergarten. Scroll down for a free th book.

First, what are consonant digraphs?

_tch as in batch

_ck as in deck

Reading elephant offers printable phonics books that focus on each of these consonant digraphs. Get them to help your struggling reader.

To help you teach th words for kids, I’m offering a free th book. The book includes limited language, as research-based phonics books are systematic. This means, a kindergartner can be expected to read th words like math, bath, then.

However, he cannot be expected to read th words like wreath, breathe, thankful. In the attached book aimed at kindergartners, you can see that only short vowel Kindergarten words are included. Here is the book. (CLICK THE TEXT FOR THE FREE th BOOK):

Can your kindergartner read the above book yet? Surely, kindergartners need to learn consonant digraphs by the end of the year. Ron struggled so much with reading. In class, phonics was introduced haphazardly. For example, when the th unit was introduced, kids were expected to read a whole range of th words, including: teeth, third and thorn. However, in systematic phonics instruction, th can only be used with sound units the child has already learned. Thus, th words for kids should only include:

The above words only include short vowels and consonant digraphs.

Yes, the list is limited. However, this is the essence of systematic phonics. Expand out only as the child learns more. Don’t throw all word types at him at once. Later, after the child learns ALL consonant digraphs, he can learn th words with long vowels too: teeth, wreathe, breath, three, throat, throw…etc.

If your student cannot read the attached book yet, make sure he knows the following sounds. Put each sound unit on a card. Review them daily:

_tch as in batch

_ck as in deck

I hope your student enjoys the free th phonics book!

For our systematic phonics books, check out our shop.