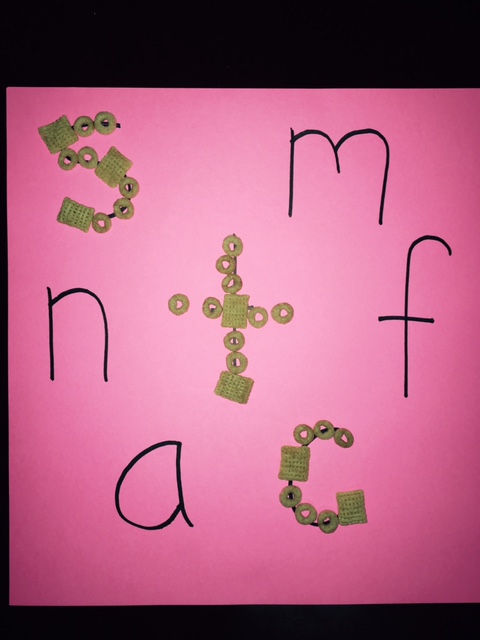 Imagine being a beginning reader. Letters on the page are just scribbles, as if someone were doodling. Mom picks up a book and starts reading aloud, and you are amazed that these scribbles are a code. You want to know the code. It seems magical. These scribbles tell stories.

Mom reads effortlessly, seemingly as fast as she speaks. You’re hopeful that this code will be easy to break. Yet, when you start learning letter sounds, you make many errors and you confuse letters that look similar like “b” and “d.” Why are letter sounds so hard to learn?

Many children struggle to identify the shapes of letters and the corresponding sound. The idea that a letter cannot be turned or re-oriented is a completely novel concept to a beginning reader. A tree is a tree from all angles. But “u” is “n” upside down. Write letters on a colorful sheet of paper. Bring out a bowl of cereal pieces, like Cheerios and Chex Mix. Have the student outline one letter at a time with the cereal.

As the student outlines the letter, encourage him to say the letter sound. Here’s an example of an effective interaction:

Teacher stays quiet to let student focus on the shape of the letter. Complete the activity until all letters are traced with cereal. Lastly, randomly point to letters and encourage the student to say the sounds. Set out rice (or a fine grain like cornmeal) on a sheet of wax paper. Have lower case letter flashcards prepared. Since letter sounds are the foundation of reading, be sure to say the letter SOUND, not the letter name. Select just a handful of letters that the student struggles with. It would be a good idea to pick common letter mix-ups, as in “b” and “d.” Again, only say the letter sounds.

The student makes “p.” If the student doesn’t know the letter “p” shape, write “p” for him on a sheet of paper. Let him copy the shape. As the student works, be sure to encourage him to say the letter sound throughout the activity.

Use the pipe cleaners to practice letter reversals. Turn the “d” shape to make a “b” and “p.” As you turn the shape, have the student identify each sound.