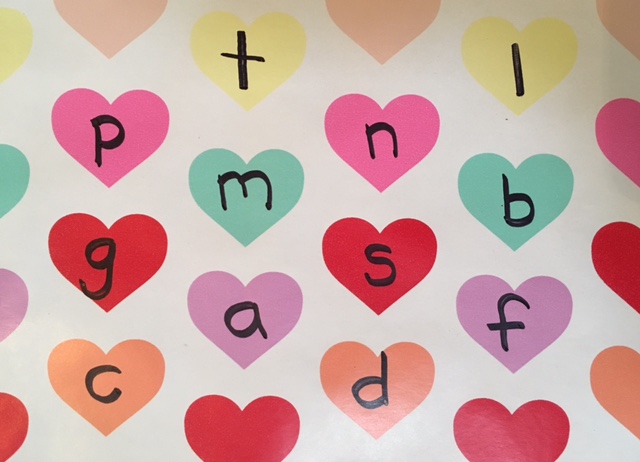 Set out two colors of playdoh on a piece of wax paper. Get lower case letter fridge magnets and orient them correctly so they face your student. Be sure you (the teacher) review continuous sounds and stop sounds before doing this activity. Kids can complete this activity largely independently. The teacher simply corrects any errors.

This activity worked well with a four-year old student with a language delay. She liked playdoh, and she especially loved imprinting things in the playdoh. I brought some animal figurines with me, so she also had fun smashing the animal feet in the playdoh to make footprints. This is also a good letter sound activity for beginning kindergartners who are learning to hold continuous sounds and clip stop sounds.

In this activity, I used wrapping paper with a patterned heart design, but you can use any pattern, including trucks, animals or whatever else your student likes. I also used one Hershey’s kiss for the student to move around to the correct heart.

Go through all letters in the same way.

I used an activity like this with a dyslexic student that struggled with remembering letter sounds. She was in the second grade. Since she could not produce sounds independently yet, this activity helped reduce feelings of frustration and failure. It was easier for her to “find” a sound I already said, than to say the sound on her own. Teacher: The goal of this activity is to fish for sea animals. I’m going to point to a letter. You say the sound. When you say the correct sound, you get to collect the animal. [Point a letter] Sound?

Student: “iiiii” [as in igloo]

Since the student got the letter right, let her “fish” for the animal. Continue the activity until the student collects all the animals.

If the student makes more than one error on This activity worked well with a Kindergarten student that liked to hunt for letters, rather than just use flashcards (though there’s nothing wrong with flashcards!). I would switch out the cutouts and change themes to keep the activity fun. I used safari animals and farm animal cutouts too. If you’re working with a preschooler, you can let them color in a background scene, and rearrange all the animals they’ve collected back onto the scene.

Many letter sound activities can be fun and effective. If you want them to be effective, be sure to avoid common letter sound teaching mistakes.

When your student knows letter sounds, he can start reading decodable books. Check out our store for printable phonics books!